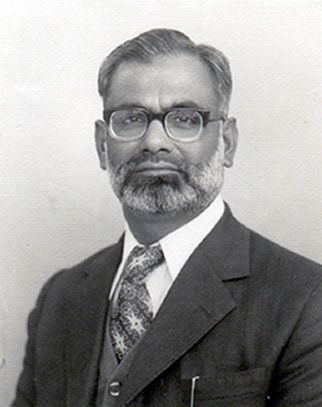 Engineer Izhar Ahmad Qureshi (late) A gold-medalist of 1947 in Civil Engineering and a highly reputable name in the veteran engineer’s community of Pakistan, He was a pioneer of his time in design and development of construction techniques for pre-casting, pre-stressing and R.C.C. elements in Pakistan.

He was born in 1927 in Hissar, part of Ambala, now located in Haryana, India. Hissar is just hundred miles to the west of Delhi. His paternal grandfather was working in the office of the Deputy Commissioner in Hissar District and after his death his father was allocated that seat. Throughout his academic career, he was distinguished with top positions. He graduated in Civil Engineering from the Punjab College of Engineering, Lahore, in 1947 with honors and 1st position amongst Muslim students. He was a self-made man with a long continuous struggle. He had dedicated his life to the profession of Civil Engineering.

From the very beginning, Mr. Izhar’s generosity and inspiring motivation to do good for his people has set him above all others as a LEADER. One such example is spending most of his income on his hobby of Research and Development of design, methodology, and manufacture of pre-cast and pre-stressed concrete elements, which began to get appreciated as increasing sales reflect it. The in-house personal technology was given out to prospective entrepreneurs in the best interest of the public free of cost.

As a result of this, more than 700 factories for production of precast and pre-stressed concrete members sprang up in Pakistan without a single penny expense in foreign exchange. In these factories, hundreds of thousands of people got employed and the country saved millions of dollars’ worth of foreign exchange every year.

Here is a quote by Mr. Izhar which serves as a source of motivation and inspirational guidance to our Youth;

For the younger, upcoming generation of Engineers, Researchers, Doctors and in-fact for all those who have decided to adopt a profession;  Some would like to get a degree or to earn a handsome living . The focal point apart from aspiring all other accomplishments should be to earn a good name and to be remembered as such successively.

This Sliding Bar can be switched on or off in theme options, and can take any widget you throw at it or even fill it with your custom HTML Code. Its perfect for grabbing the attention of your viewers. Choose between 1, 2, 3 or 4 columns, set the background color, widget divider color, activate transparency, a top border or fully disable it on desktop and mobile.

Sign-up to get the latest news and update information. Don't worry, we won't send spam!